The steps 1 to 12 of this NSX-T Installation series focused on the setup of the NSX-T Datacenter components i.e.  NSX-T Management Cluster, Host and Edge Transport Nodes. From, Step 13 onwards, the focus shifted to building logical network topology that I alluded to in Step 0 – High Level Design.

The previous step, discussed VLAN Segments and step-by-step instructions on how to configure one. This blog is part of the Second Phase i.e. building the logical network topology and “Step 17” of the NSX-T Installation series, in which we will discuss T0 (Tier-0) Gateway, its considerations, SR (Service Router), DR (Distributed Router), followed by step-by-step instructions on how to create an active-active T0 Gateway.

The image below highlights the logical entity of the “Routing Design” this step focuses on: 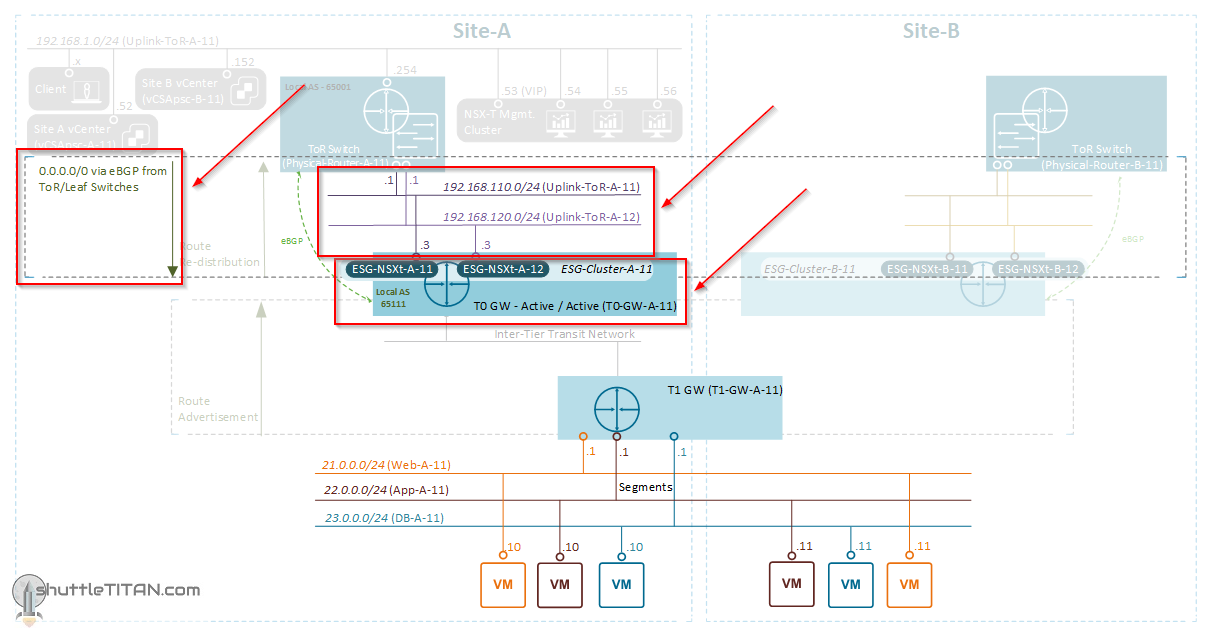 A Tier-0 Gateway performs the functions of a Tier-0 logical router. It has downlink connections (auto-plumb) to Tier-1 Gateway(s) [created in Step 13] and uplink connections to physical networks.

NSX-T v2.4 introduced quite a lot of changes, one of them was the new UI i.e. introduction of the “Simplified UI” (also known as Policy UI) and “Advance UI” (also known as Manager UI). If you are familiar with the previous versions of NSX-T (v2.3 and before), the “Tier-0 Router” is now referred to as “Tier-0 Gateway” in the new “Simplified UI” but is referred to as “Tier-0 logical router” in the “Advance UI“.

Background: Each logical router contains a services router (SR) and a distributed router (DR). A DR is distributed across all transport nodes that belong to the same transport zone and an SR is centrally instantiated on the Edge Appliance(s). An SR instance is required for services that cannot be distributed i.e. Physical Connectivity, NAT, DHCP, Load Balancers, etc. 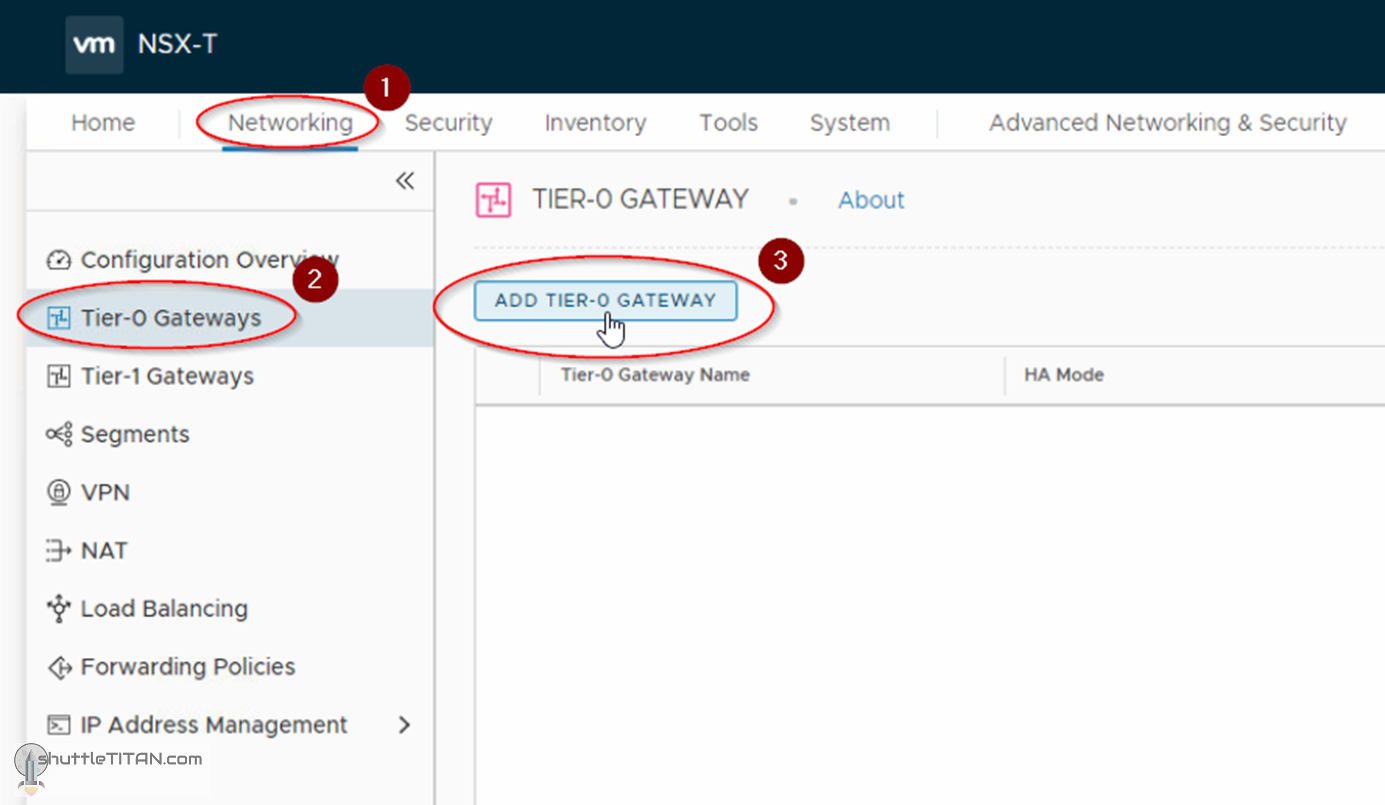 3. Click “Yes” when asked to continue configuring the Tier-1 Gateway: 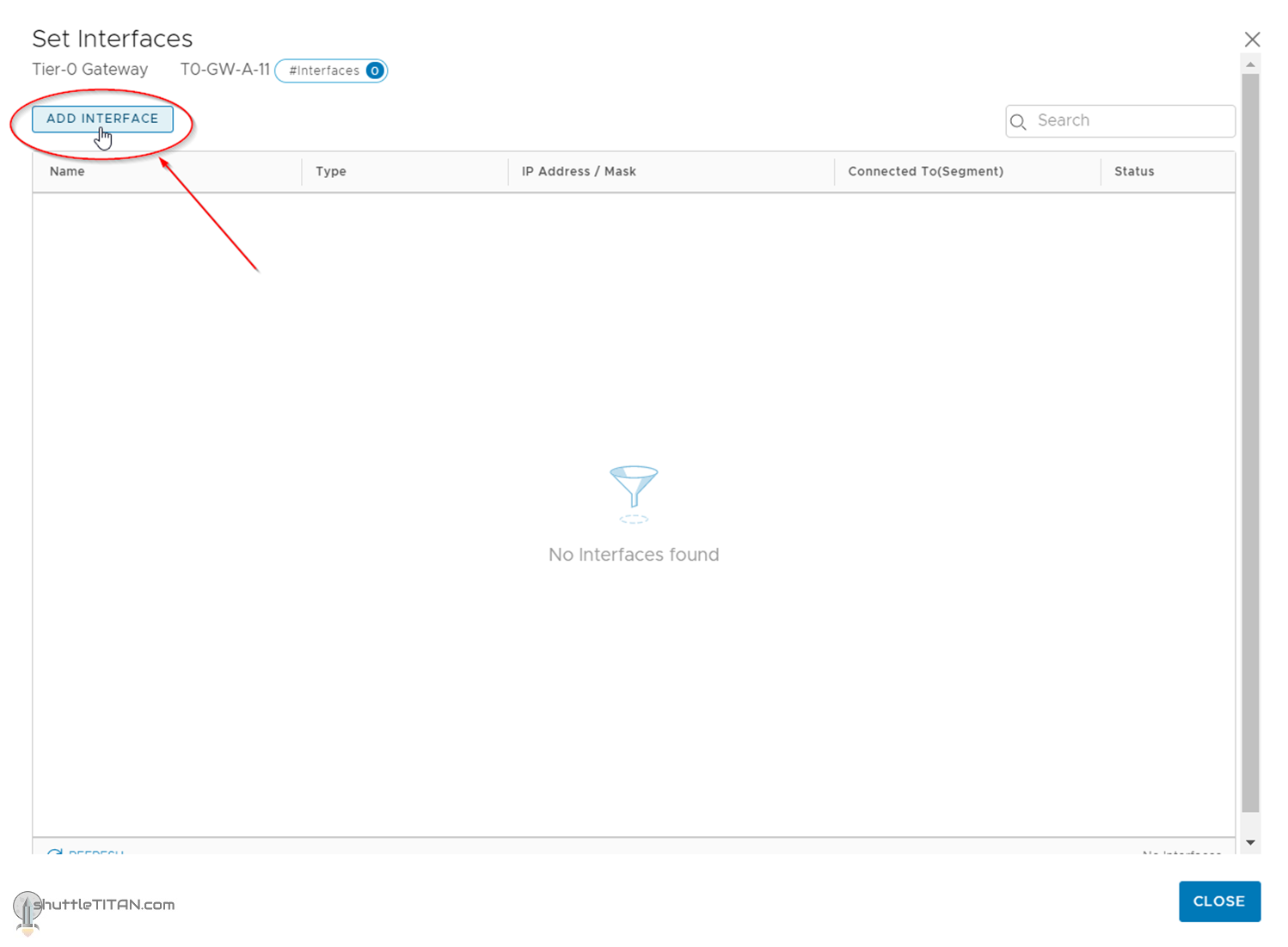 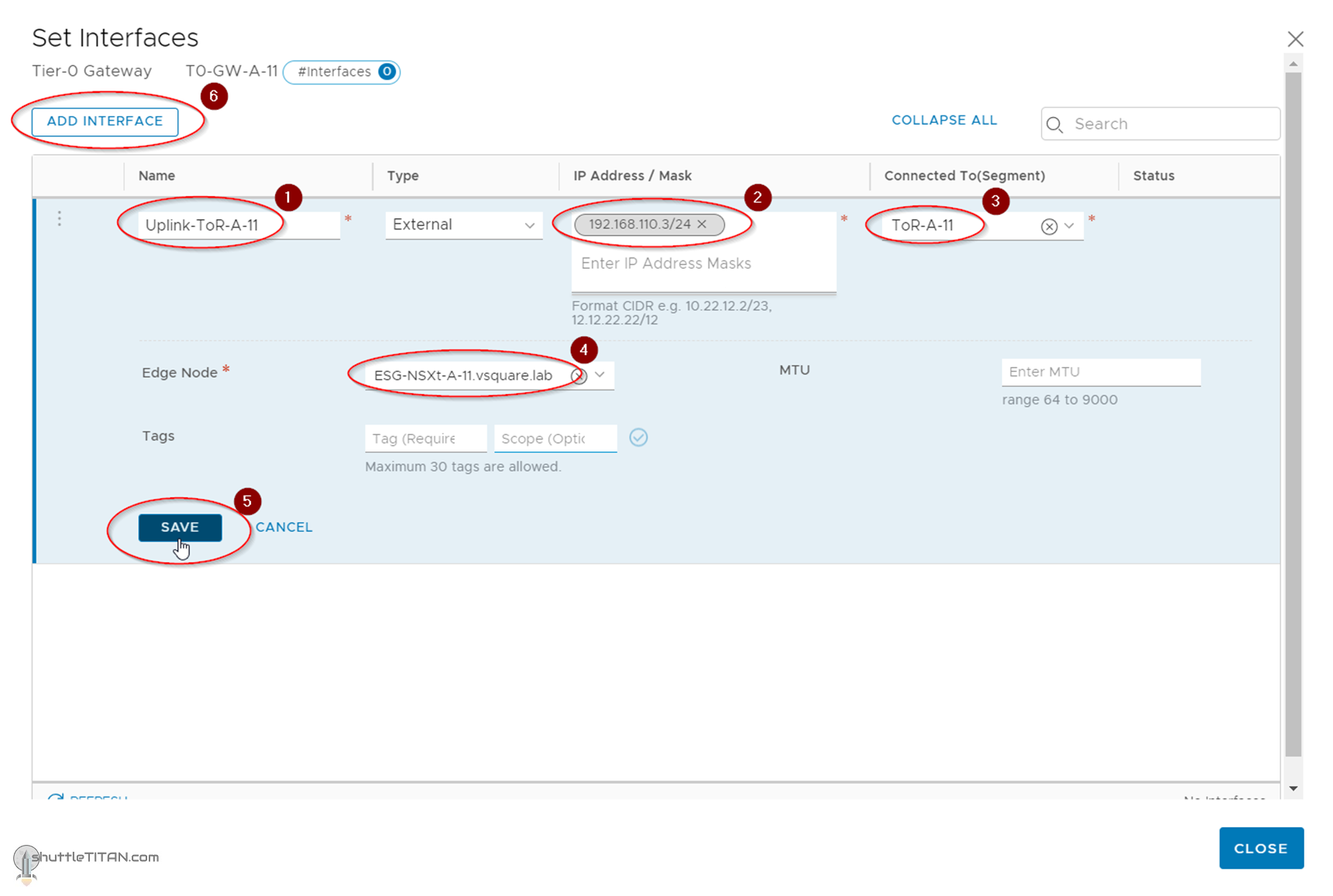 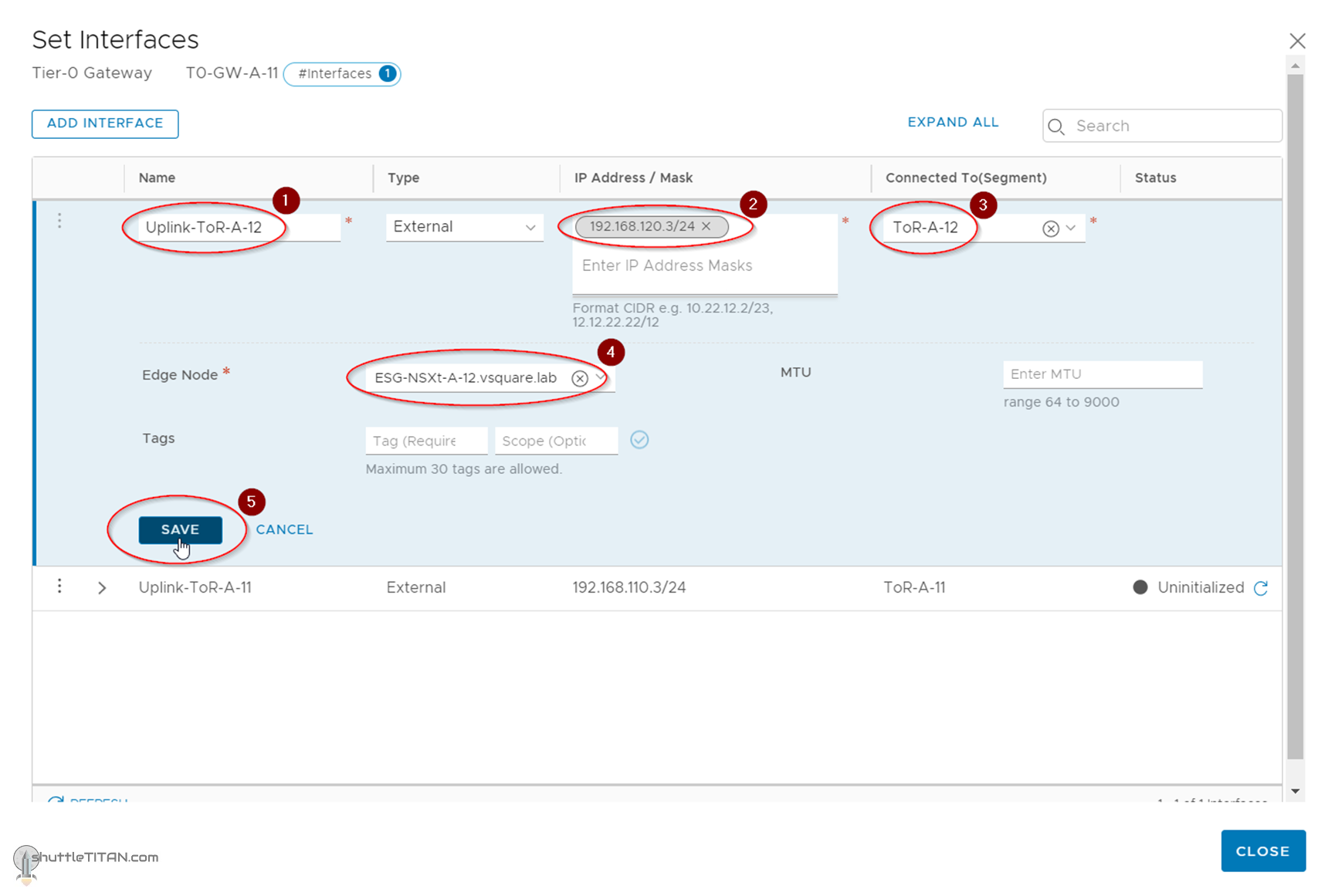 8. Both Interface should now list and show the status “Up”: 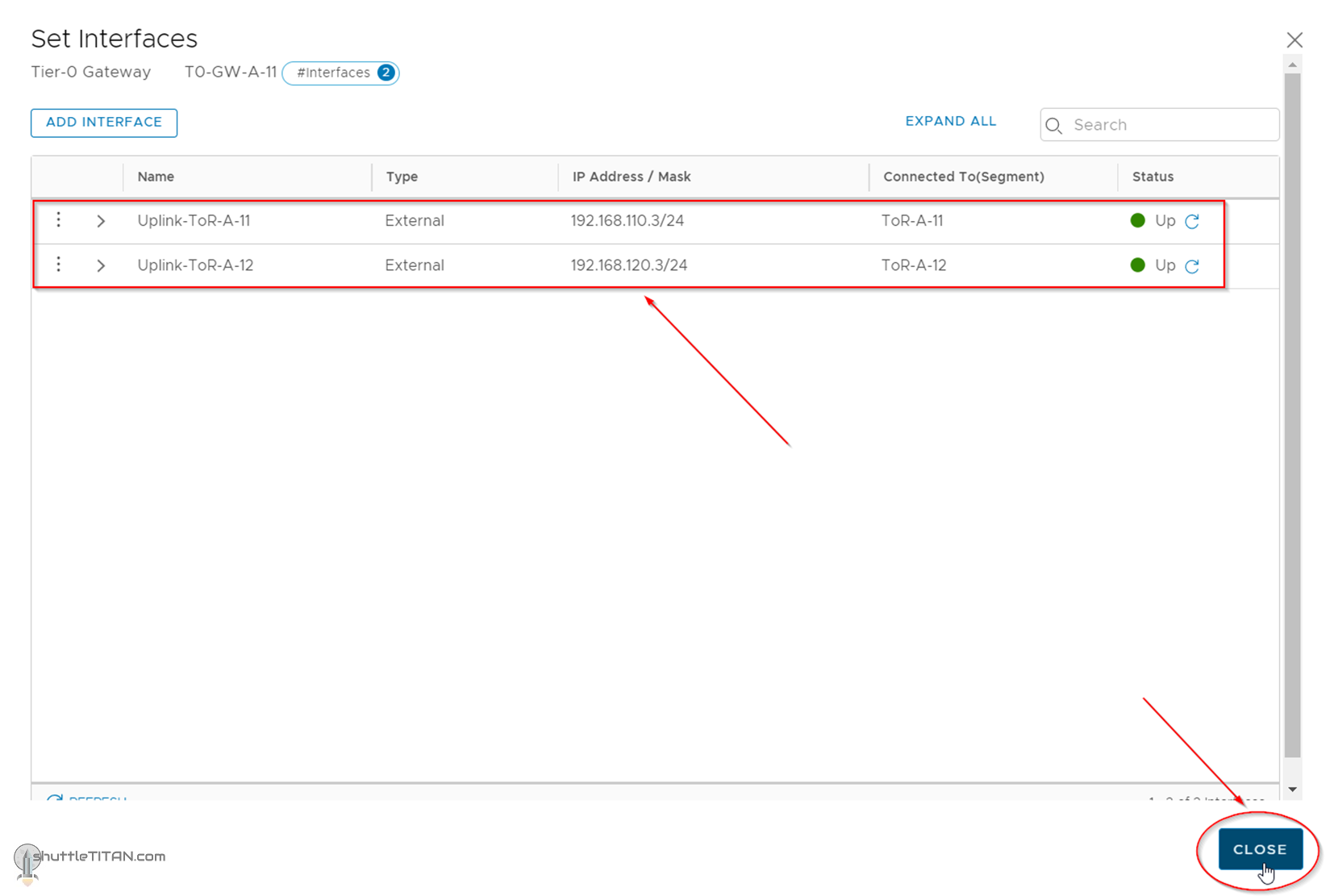 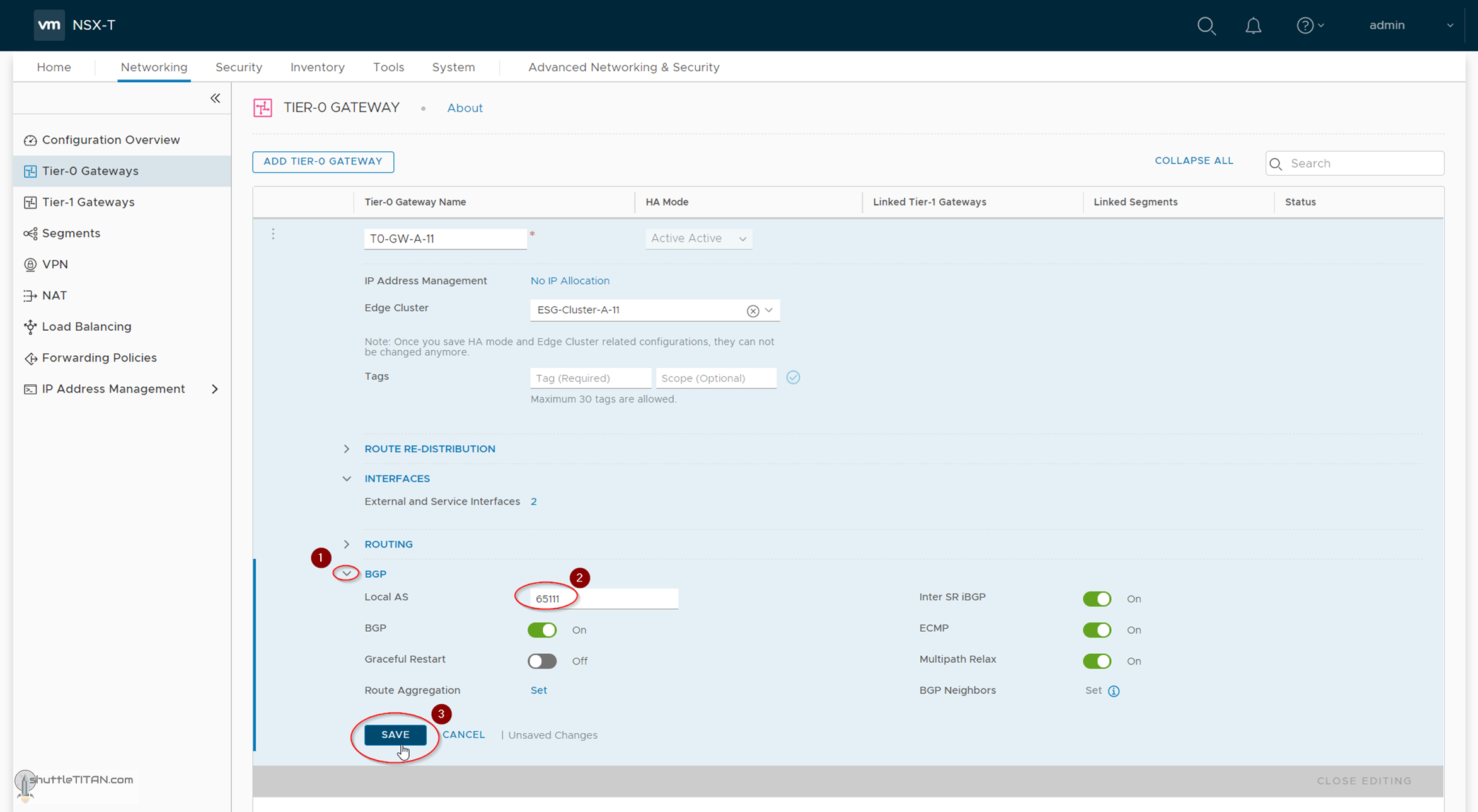 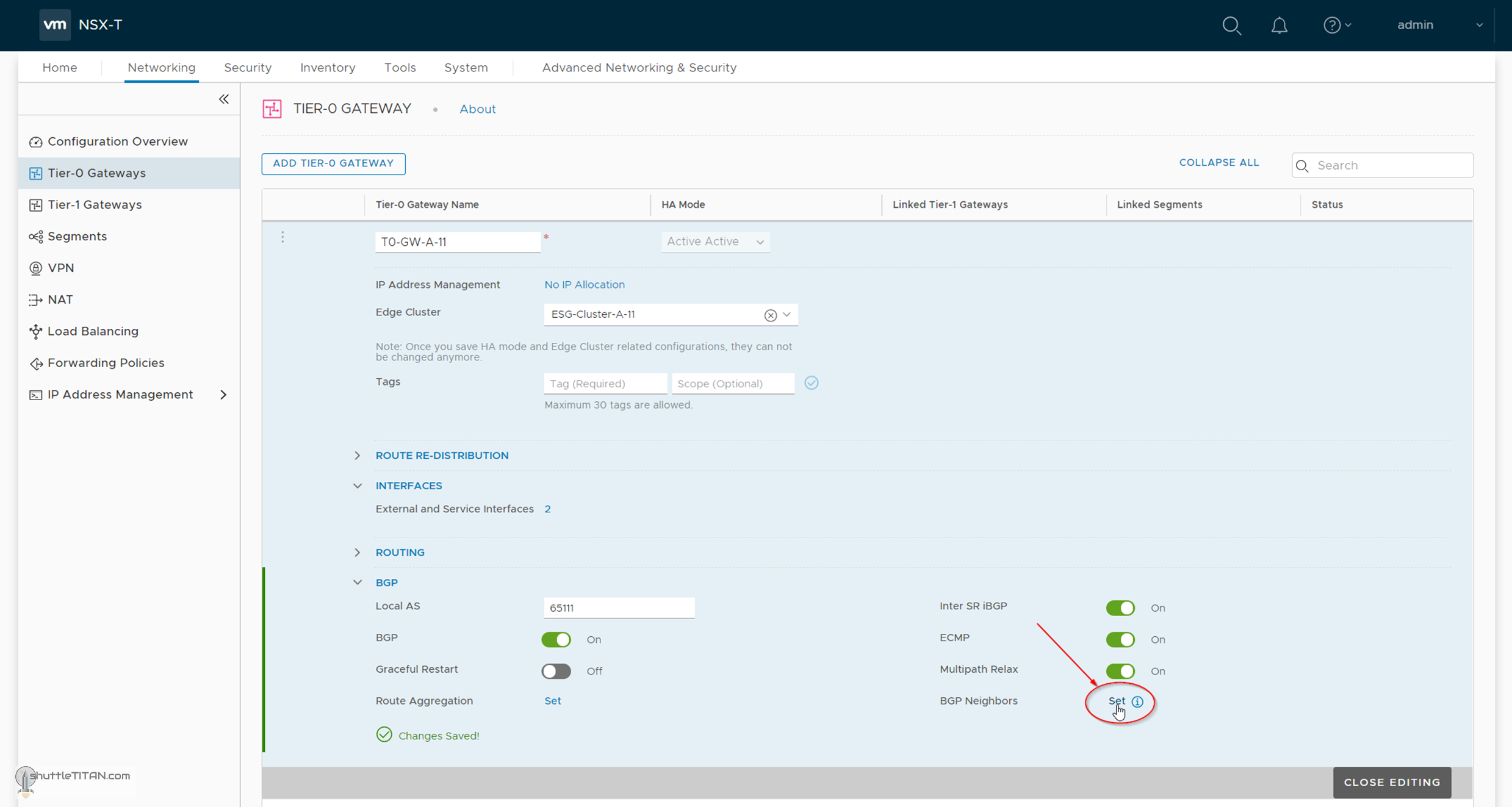 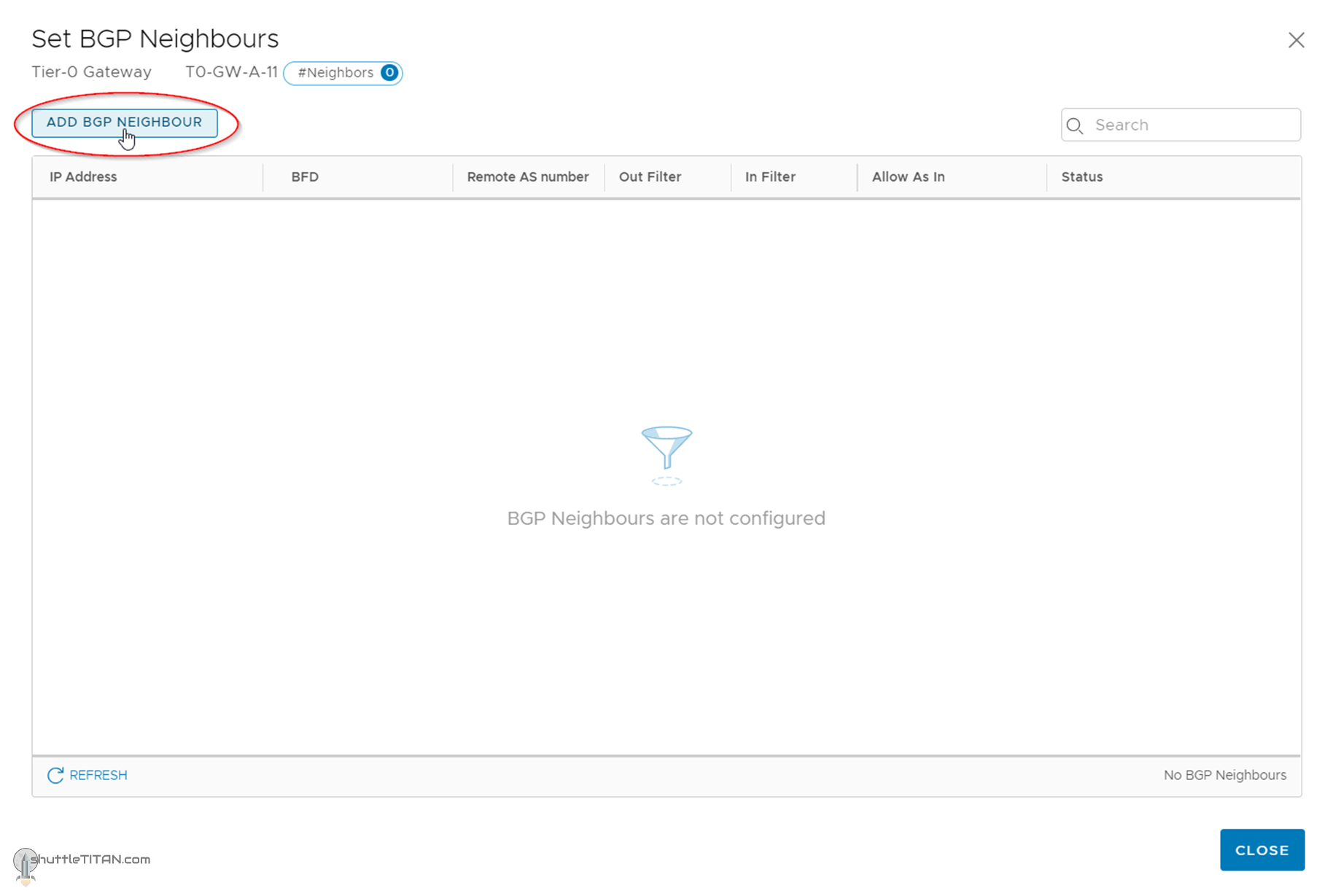 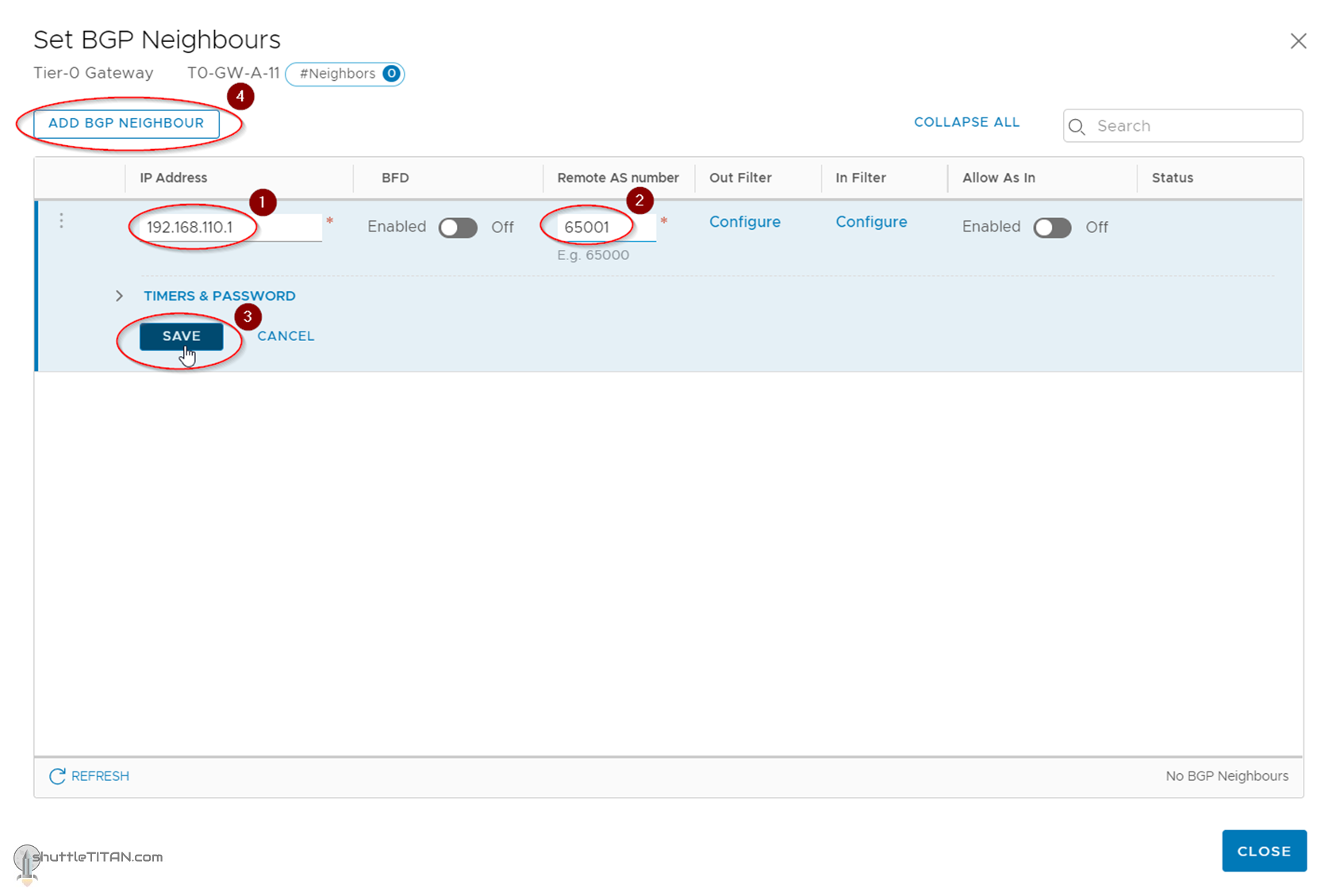 13. Specify the second neighbour interface, Remote AS number, Click “SAVE”: 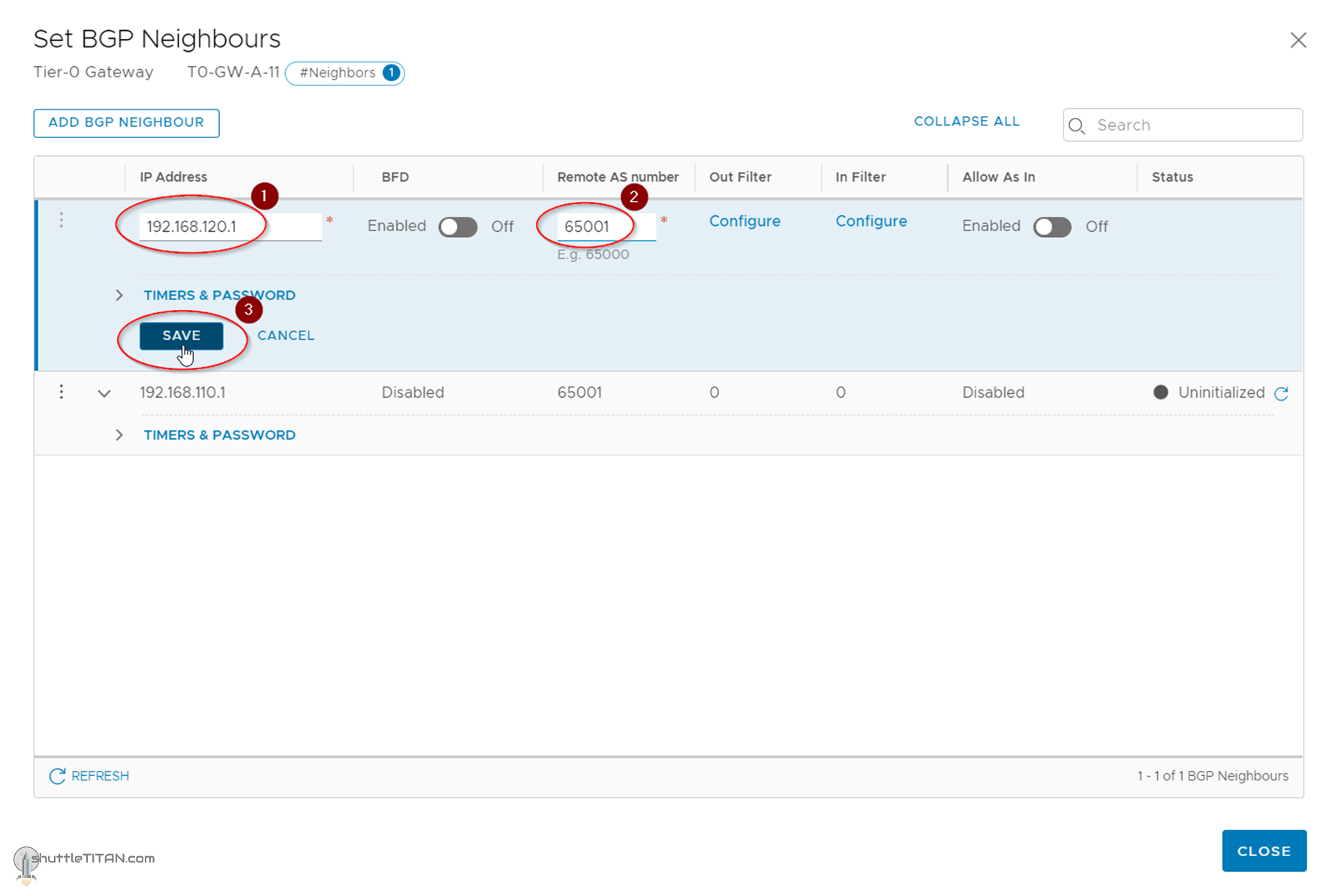 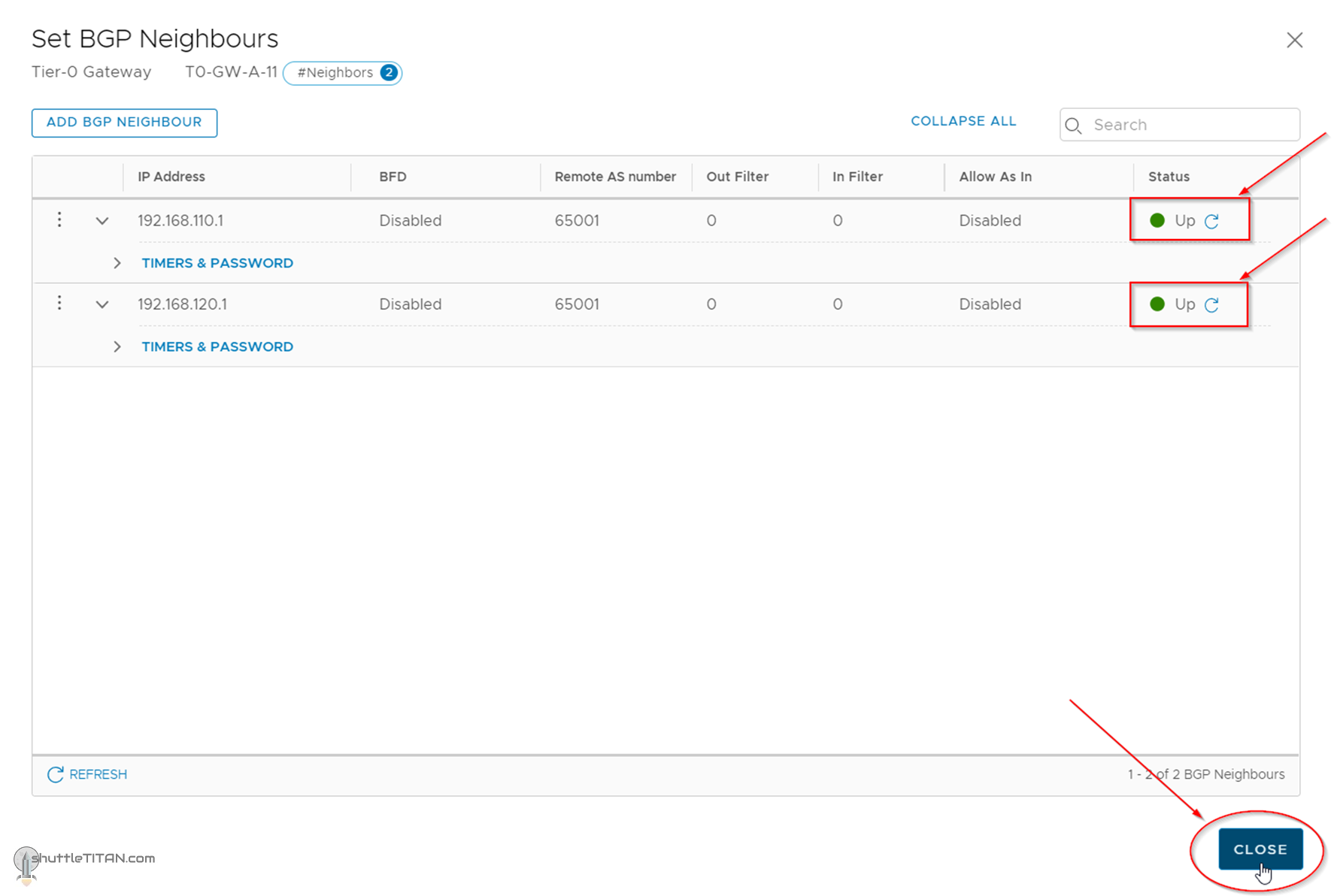 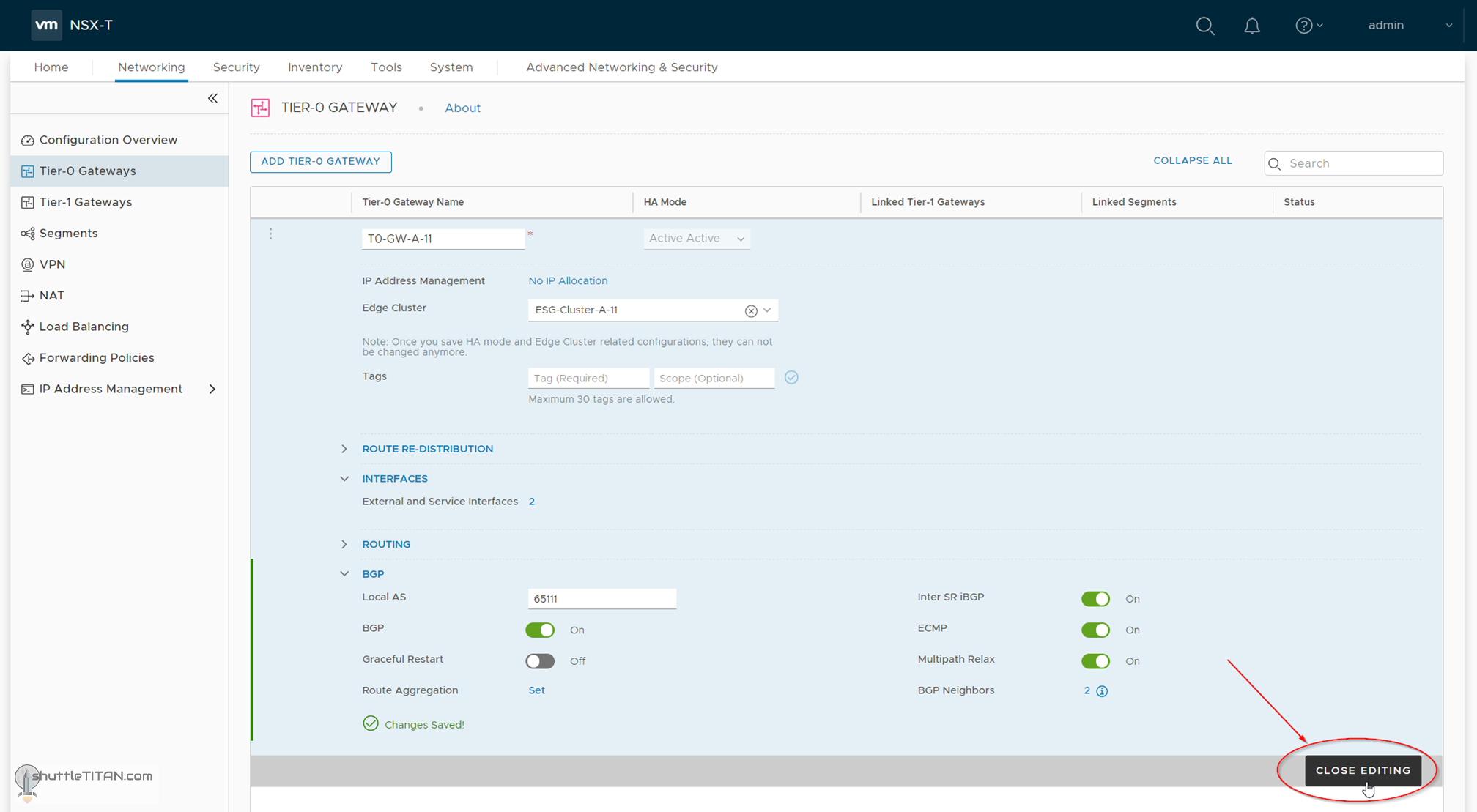 Confirm the status showing “Up”, as shown in the screenshot below:

This concludes this step of creating T1 (Tier-0) Gateway, configuring BGP and its neighbors successfully.

Note: The scope of this NSX-T Installation series is only to configure one (1) interface per edge node for this “Active-Active” Tier-0 Gateway.

By default, Tier-0 tries to establish BGP neighbor on all External (Uplink) interfaces available. However, if you have two(2) ToR physical switches and would prefer to have two interfaces per edge node, you would need to map the BGP neighbor to use specific Uplink (External) Interface which is done via “Advanced UI”, discussed in the next blog in this series Step 18 – T0 (Tier-0) Gateway: Map BGP Neighbor to specific Uplink Interface.