It’s been a while since I talked about the NSX-T architecture in my previous blog here, which unfortunately is now only applicable to NSX-T v2.3 and earlier. Fortunately, with NSX-T v2.4 and later, VMware introduced an architectural change that simplified the overall management, installation and upgrades; brought high availability, scalability along with flexible deployment options.

I opted to split the new architecture into two parts, for easier understanding:

Along with the introducing many new features, a major change in the architecture of NSX-T v2.4 (and later) was brought to the table i.e. consolidation of the Management and Control Plane in a single appliance supporting clustering and scalable to three nodes. Similar to the previous deployment of controller nodes, it now supports high availability for Management plane i.e. the user interface and API consumption: 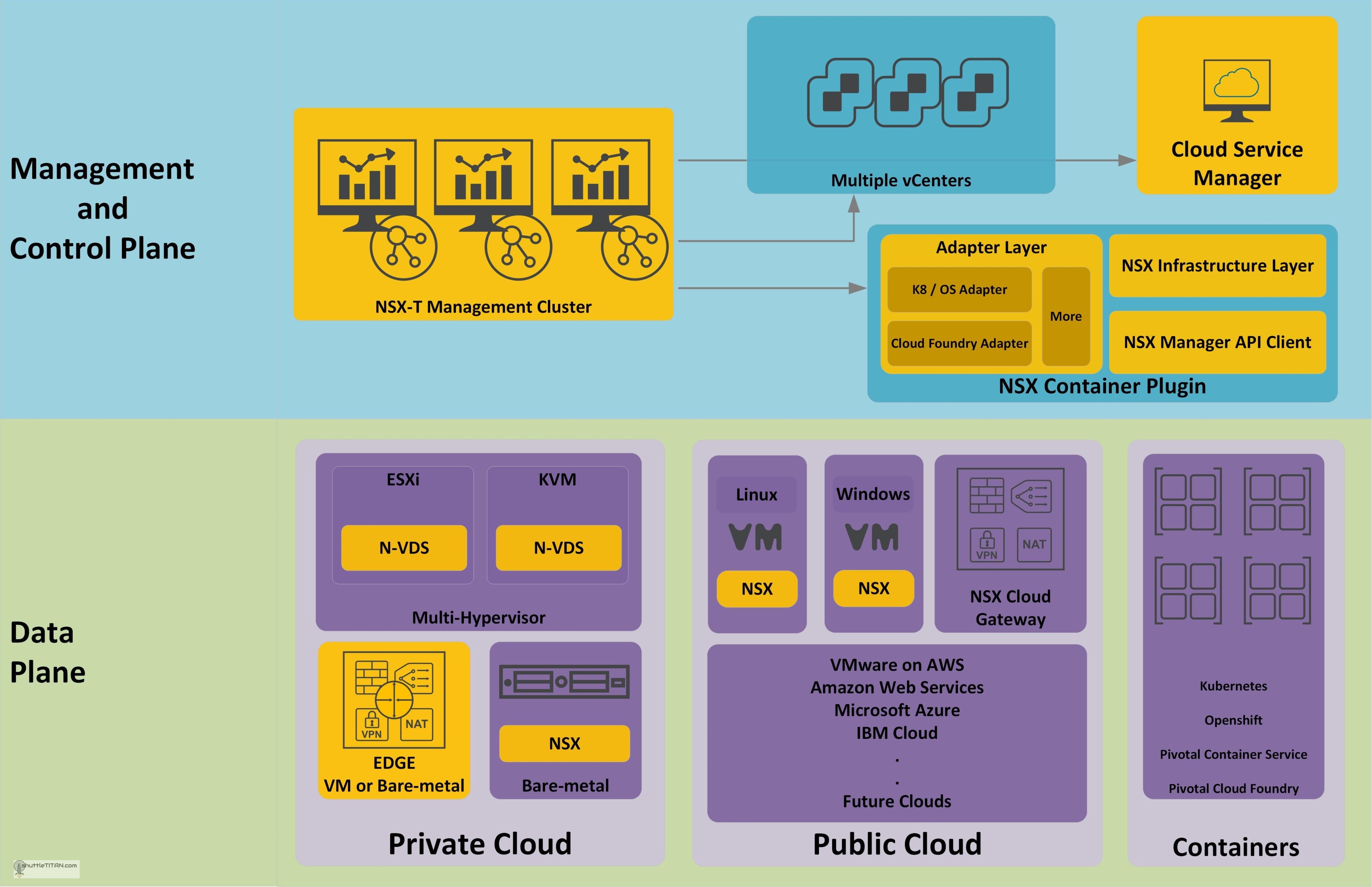 We will not do a deep dive on every individual component of NSX-T (perhaps in separate upcoming blogs in the future 😊) but we will touch bases and cover all aspects briefly, to help make sense of what and why they are used.

The Management plane provides the entry point to NSX-T Datacenter, to perform operational tasks such as configuration and monitoring of all management, control, and data plane components. The changes are made using either by NSX-T Data Center UI or RESTful API. The Management plane is further segregated into two roles: Policy and Management Role.

NSX-T Management Cluster – As mentioned earlier in the blog and illustrated in the image above, both Management and Control planes are consolidated into a single appliance, scalable to three node cluster, providing high availability to all services including GUI and API.

NCP monitors changes to containers and other resources. It also manages networking resources such as logical ports, switches, routers, and security groups for the containers through the NSX API.

Adapter layer: NCP is built in a modular manner so that individual adapters can be added for a variety of CaaS and PaaS platforms.
NSX Infrastructure layer: Implements the logic that creates topologies, attaches logical ports, etc.
NSX API Client: Implements a standardized interface to the NSX API

Multi-Hypervisor: NSX-T is designed not just for ESXi but also with other Hypervisors based on KVM. Following are the Hypervisors supported by NSX-T v2.3 release:

Note: Please refer the release notes of the NSX-T version, you are going to deploy to confirm the compatibility of the hypervisor version supported.

Bare-metal Servers: Starting with NSX-T v2.3, VMware introduced support for Linux based workloads as well as containers running on bare-metal servers which is carried over to the current versions. Following are the Operating Systems supports by NSX-T v2.5 and 2.4 release:

Note: Please refer the release notes of the NSX-T version, you are going to deploy to confirm the compatibility of the bare-metal server’s perating system version supported.

NSX Edge nodes are service appliances dedicated to running centralised services i.e. Load Balancing, NAT, Edge Firewall, VPN, DHCP, Connectivity to the physical network. They are grouped in one or several clusters, representing a pool of capacity. NSX Edge node can be deployed as VM appliance on ESXi OR on a bare-metal server but it is not supported on KVM based hypervisors up as of NSX-T v2.5 release.

Note: Edge node deployment on bare-metal servers have limited “Intel” CPU support and specific NIC card requirements. Therefore, I would recommend referring the compatibility of the NSX-T version on VMware HCL, before deployment.

NSX-T also expands the scope to the Public Clouds, it does that by the deployment of Public Cloud Gateways (PCG) via the Cloud Service Manager (CSM). What it provides – Visibility, consistent network and security policy and end to end operational control via a single pane of glass.

NSX Cloud Gateways provides a localized NSX control plane in each VPC/VNET and is responsible for pushing policies down to each public cloud instance.

An NSX Agent is pushed to the VMs running in public clouds and is mandatory for NSX-T v 2.4. However, NSX-T v2.5 introduces an agentless option for policy enforcement which translates NSX policies to native cloud specific security Policies (subject to Cloud provider limits – scale, feature, etc.)

NSX-T v2.5 release supports VMware on AWS, AWS, Azure and IBM Cloud so far however the idea is to add more clouds in the future, to keep in line with the preposition of “NSX Everywhere.”

Compatibility Requirements for a Kubernetes Environment for NSX-T v2.4.1 and v2.5 are as follows:

I hope that was informative, let’s talk about the “NSX Agents/services” that work behind the scenes for communication between NSX-T manager nodes and transport nodes in NSX-T Architecture (Revamped): Part 2