** [NOTE] – This blog is only applicable to NSX-T v2.3 and earlier.
Please see the NSX-T Architecture (Revamped): Part 1 for NSX-T v2.4 and later that talks about the new architecture introduced by VMware. **

Every few years we see a systemic shift in IT, the traditional technical ways of achieving the business objectives are replaced by implementing new advance technologies that are more efficient, secure and robust. In the world of networking and security, VMware NSX-T is gaining momentum and is the focus in “this era” of “clouds and containers”.

The “T” in NSX-T stands for Transformers. The use cases of NSX-T are similar to NSX-V i.e. software defined networking, micro-segmentation, automation, etc. but in addition, it also expands the scope to public clouds and other heterogeneous compute systems. NSX-T is not only designed to work well with VMware vSphere but also for other hypervisors platforms based on KVM and hence the word “multi-hypervisor” software defined networking solution.

As I began writing blog posts on NSX-T installation, I thought it was necessary to complement it with the NSX-T Architecture. This blog post is Part 1, and let’s review the following diagram to discuss the different planes of its architecture: 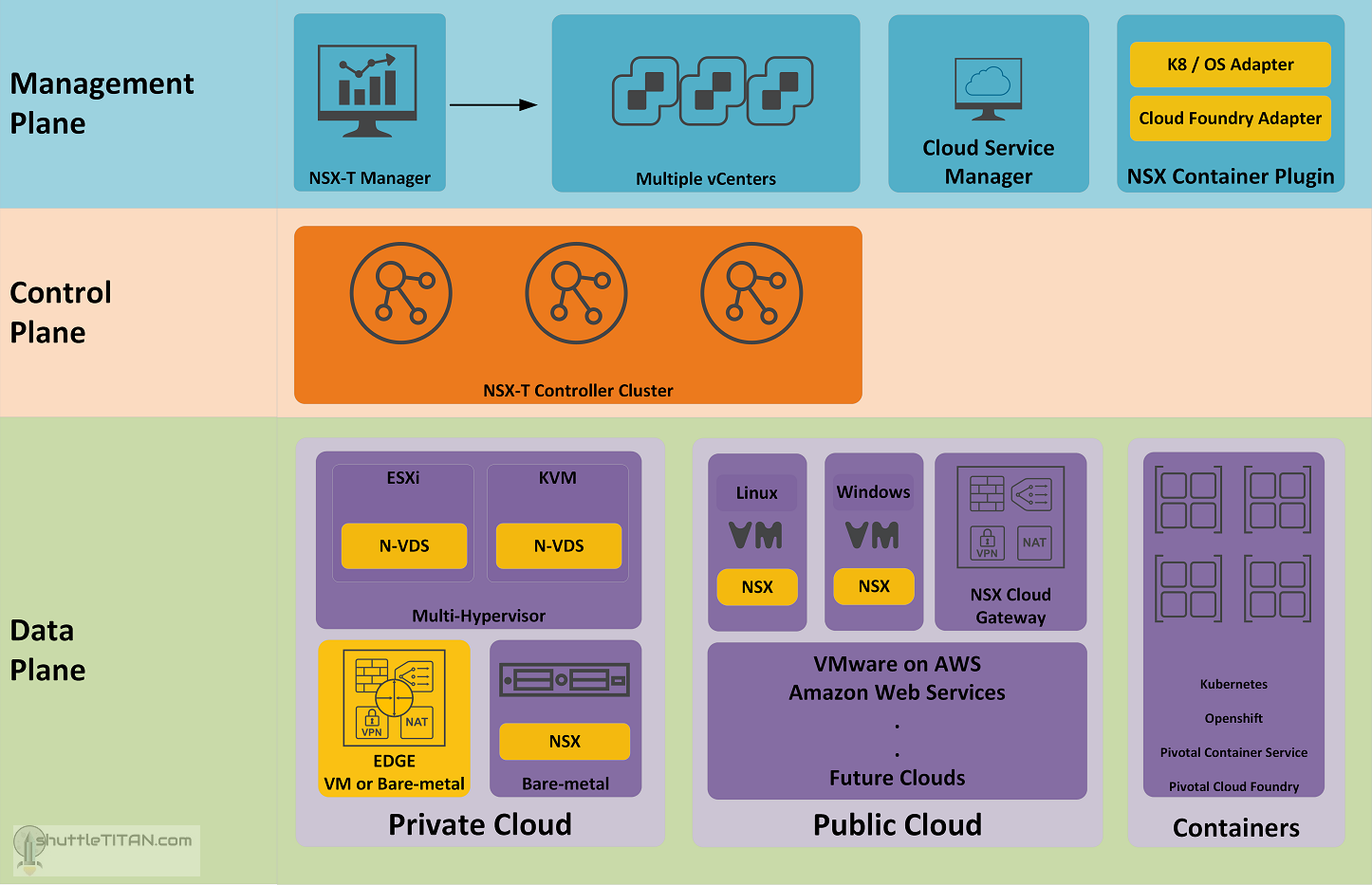 We will not do a deep dive on every individual component of NSX-T (perhaps in separate upcoming blogs in the future :)) but we will touch bases and cover all aspects briefly, to help make sense of what and why they are used.

The Management plane provides the entry point to NSX-T Datacenter, to perform operational tasks such as configuration and monitoring of all management, control, and data plane components. The changes are made using either by NSX-T Data Center UI or RESTful API.

NSX-T manager is the central point of management of the components of NSX-T. NSX-T does not have a 1 to 1 relationship with the vCenter like NSX-V, it can work with multiple vCenters servers at once.

It contains NSX-T Controllers which are Linux appliance deployed in the number of three instances, forming the Cluster. Unlike NSX-V, NSX-T controllers are necessary deployment of distributed firewalls.

NSX-T is designed not just for ESXi but also to work with other Hypervisors based on KVM. Following are the Hypervisors supported by NSX-T v2.3 release:

Starting with NSX-T v2.3, VMware introduced support for Linux based workloads as well as containers running on bare-metal servers. Following are the Operating Systems supported by NSX-T 2.3 release:

NSX Edge nodes are service appliances dedicated to running centralised services like Load Balancing, NAT, Edge Firewall, VPN, DHCP, Connectivity to the physical network. They are grouped in one or several clusters, representing a pool of capacity. NSX Edge node can be deployed as VM appliance on ESXi OR on a bare-metal server but it is not supported on KVM based hypervisors, as of NSX-T 2.3 release.

Note: Edge node deployment on bare-metal servers have limited “Intel” CPU support and specific NIC card requirements. Therefore, I would recommend referring the compatibility of the NSX-T version before deployment.

As I mentioned in the beginning NSX-T also expands the scope to the Public Clouds, it does that by the deployment of Public Cloud Gateways (PCG) via the Cloud Service Manager (CSM). What it provides is the visibility, consistent network and security policy and end to end operational control via a single pane of glass.
Example – If you have NSX-T deployed within your Datacenter you can seamless extend the features to public cloud that you manage. Having said that, it does not mean you need to have NSX-T deployed and running in your Datacenter first, you could start with NSX on cloud and do a reverse journey to your Datacenter.

NSX-T v2.3 release supports AWS and Azure, however the idea is to add more clouds in the future, to keep in line with the preposition of “NSX Everywhere.”

NSX Cloud Gateways provides a localised NSX control plane in each VPC/VNET and is responsible for pushing policies to each public cloud instance. An NSX Agent is pushed to the VMs running in public clouds.

Compatibility for a Kubernetes Environment for NSX-T v2.2 and v2.3 are as follows:

Compatibility for a Cloud Foundry Environment:

It is does get clear from above that NSX-T architecture differs quite a lot from NSX-V, though the basic concepts are similar. Having said that “NSX-T is not equivalent to NSX-V.

NSX-T excels in many areas compared to NSX-V, however it lacks in few areas (as of writing this blog post), a good example is e.g. cross vCenter Implementations. However, VMware intends to close this gap and have a complete parity between the features of NSX-V and NSX-T in the next upcoming releases.

Lets talk about the NSX Agent communication that act behind the scenes in the NSX-T Architecture Part 2.