There’s lot of information on NUMA implementation from processors manufacturers and software vendors, which can sometimes become a challenge and you end up re-visiting multiple blogs and VMware PDF files — This blog is a consolidation (one reference point) to understand NUMA, vNUMA, “why it is important in the world of hypervisors?”, changes in vNUMA from vSphere v6.5 onwards, configuration overrides, Rule of thumb, recommendations on “Cores per Socket” configuration for vSphere v6.7 and v7.0.

Let’s begin with “UMA” (Uniform Memory Architecture) architecture, which is described as all processors accessing memory through a shared bus (or another type of interconnect). NUMA (Non-Uniform Memory Access), is also a shared memory architecture but it describes the placement of main memory modules with respect to processors in a multiprocessor system i.e. each processor has its own local memory module that it can access directly with a distinctive performance advantage. At the same time, it can also access any memory module belonging to another processor using a shared bus.

Why is it important in the world of hypervisor’s?

A NUMA Node is referred to as a processor with direct attached memory. Under some (but not all) conditions, accessing memory or devices across NUMA boundaries will result in decreased performance.

This becomes evident for VMs to utilize directly attached memory to the processor its running on, else (in some cases) the VM running will take some form of performance hit.

With vSphere 4.1 the ability to present an option to define vCPU Cores and Socket was first introduced. In vSphere 5, the configuration determined the vNUMA topology exposed to the Operating System.

The intelligent, adaptive NUMA scheduling and memory placement policies in ESXi can manage all virtual machines transparently, so that administrators don’t need to deal with the complexity of balancing virtual machines between nodes by hand.

By default, ESXi NUMA scheduling and related optimizations are enabled only on systems with a total of at least four CPU cores and with at least two CPU cores per NUMA node.

The value 0 and 1 constrains the VM resourcing scheduling to NUMA nodes 0 and 1.

– For specific VM ,add the following configuration in the .vmx file (of from the GUI using advance configuration)

– For all VMs to use hyper-threading with NUMA, add the following configuration on the ESXi Host Advance settings:

These are advanced settings designed to help workloads that are cache-intensive, but not CPU intensive.

Virtual NUMA, requires virtual hardware version 8 or later, can in some cases provide significant performance benefits for wide virtual machines (that is, virtual machines with more vCPUs than the number of cores in each physical NUMA node), though the benefits depend heavily on the level of NUMA optimization in the guest operating system and applications.

vNUMA with vSphere 6.5 and later:

From vSphere v6.5 and later, vNUMA handling improved – which automatically determines the proper vNUMA topology to present to the guest OS based on the underlying ESXi host. The “Cores per Socket” no longer influences vNUMA or the configuration of the vNUMA topology. The configuration “Cores per Socket” now only affects the presentation of the virtual processors to the guest OS, something potentially relevant for software licensing.

For example: prior to vSphere v6.5, on a dual-socket physical ESXi host with 16 core per socket (for a total of 32 physical cores) – if you create a four-vSocket virtual machine and set cores per socket to four (for a total of 16 vCPUs), vNUMA would have created four vNUMA nodes based on the corespersocket setting. In vSphere 6.5 and later, the guest OS will still see four sockets and four cores per socket, but vNUMA will now create just one 16-core vNUMA node for the entire virtual machine because that virtual machine can be placed in a single physical NUMA node – but wait, see the “The Caveat” later in the blog below.

This new decoupling of the corespersocket setting from vNUMA allows vSphere to automatically determine the best vNUMA topology, unless the VMs Advance Virtual NUMA Attributes.

Note: X is the number of vCPUs in the virtual machine.

The automatic vNUMA node determination from vSphere v6.5 and later is great optimization for handling VM’s CPU and Memory to align with pNUMA however the number virtual sockets does not consider the “cache address space” i.e. L3 cache. Therefore, it is recommended to take caution while configuring “Cores per Socket” and it should be aligned considering the boundaries of the physical CPUs for optimal performance. For more information and deep dive, see Frank Denneman’s blog here.

The table below outlines how a virtual machine should be configured, if the VM’s memory configuration is less than or equal to the pNUMA node memory, to ensure an optimal vNUMA topology and performance regardless of vSphere version: 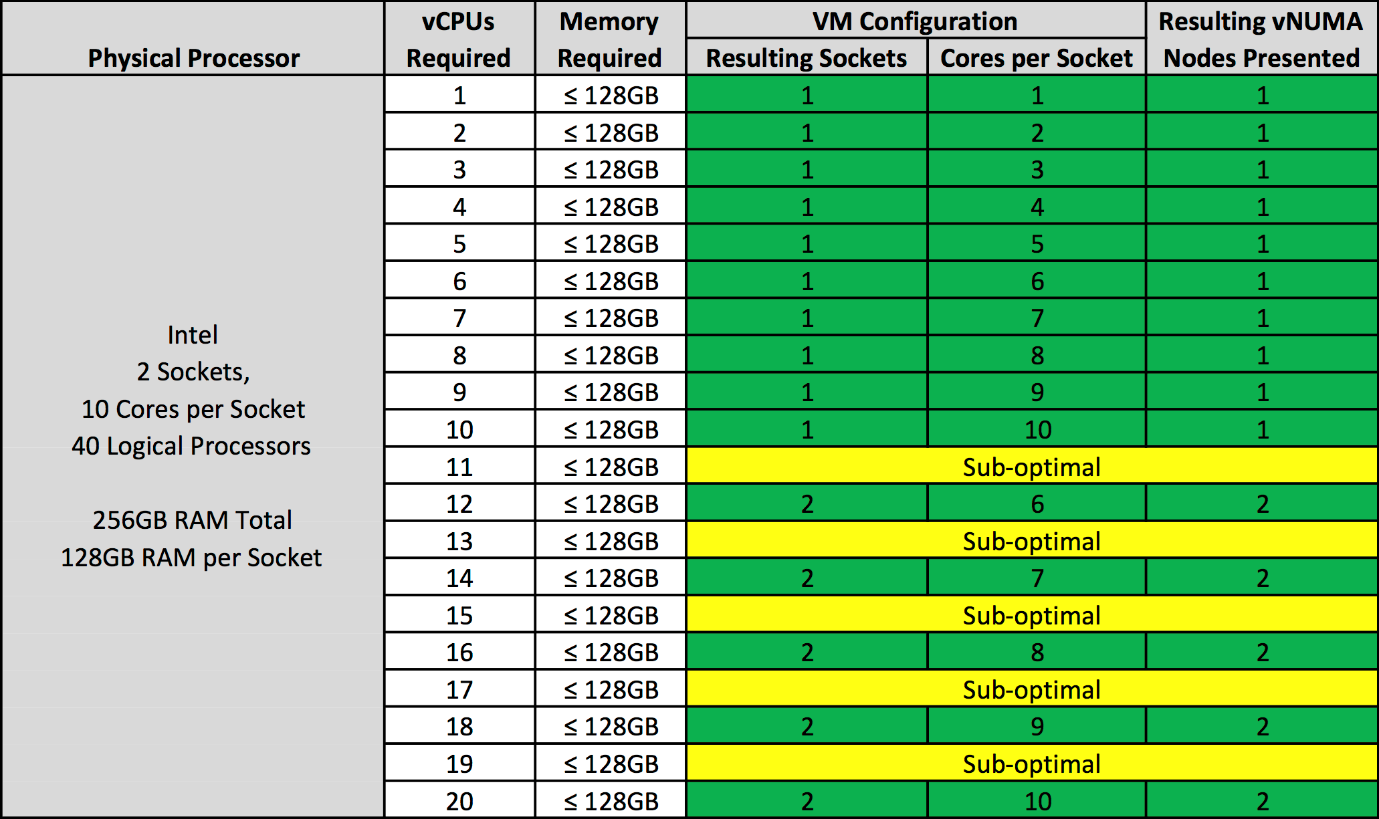 The table below outlines how a virtual machine should be configured, if the VM’s memory configuration is more then the pNUMA node memory, to ensure an optimal vNUMA topology and performance regardless of vSphere version: 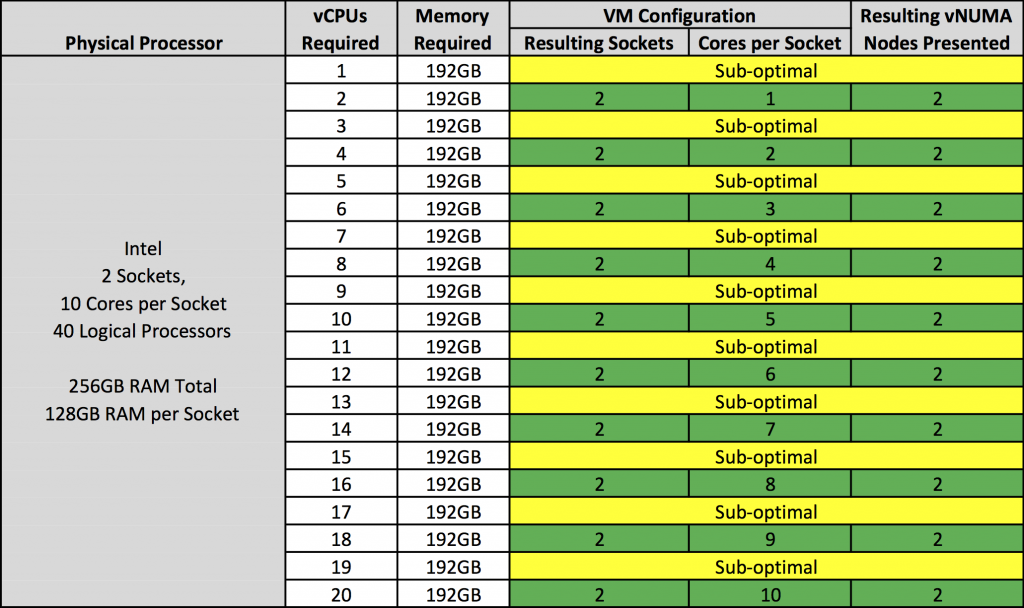